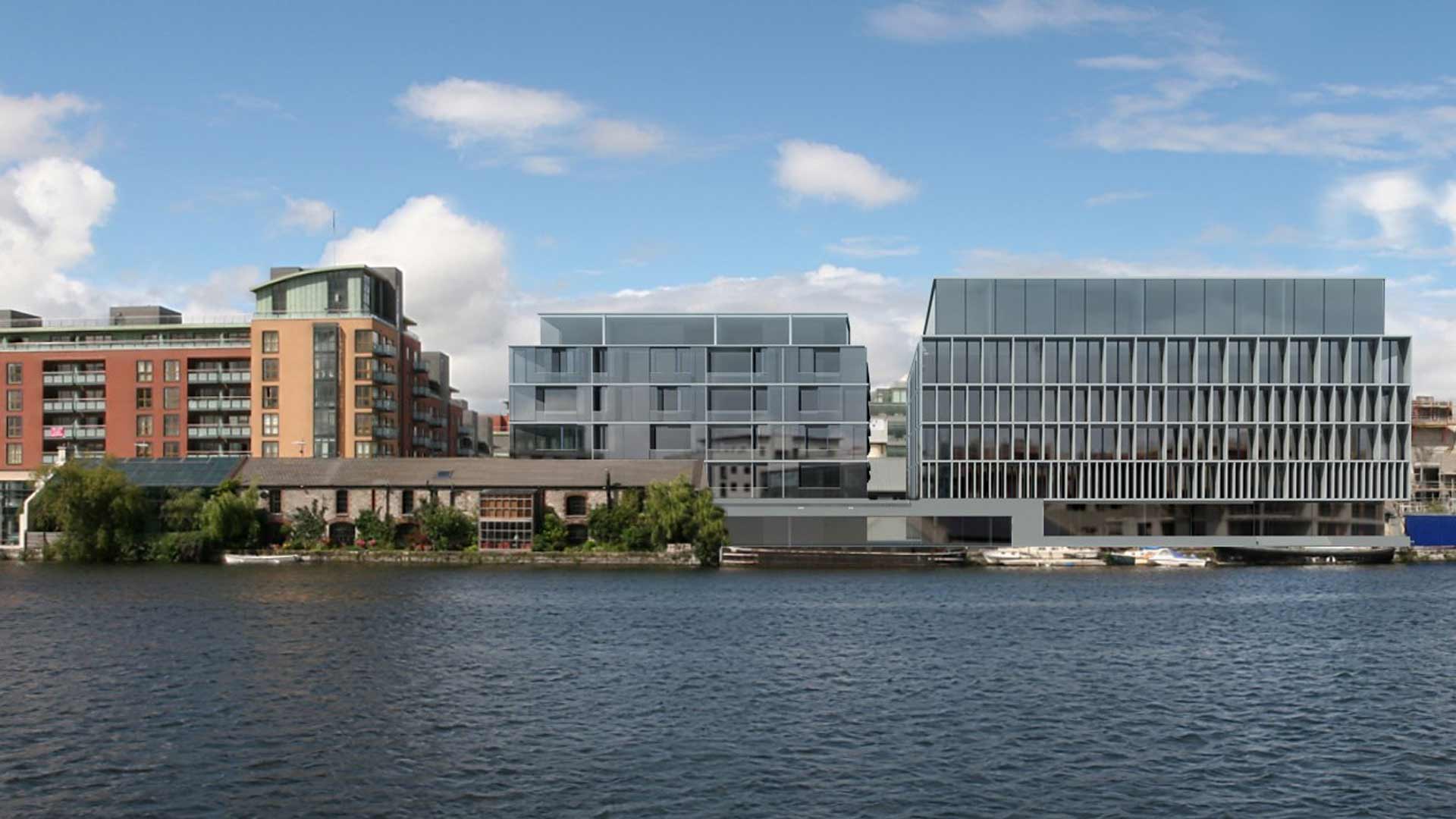 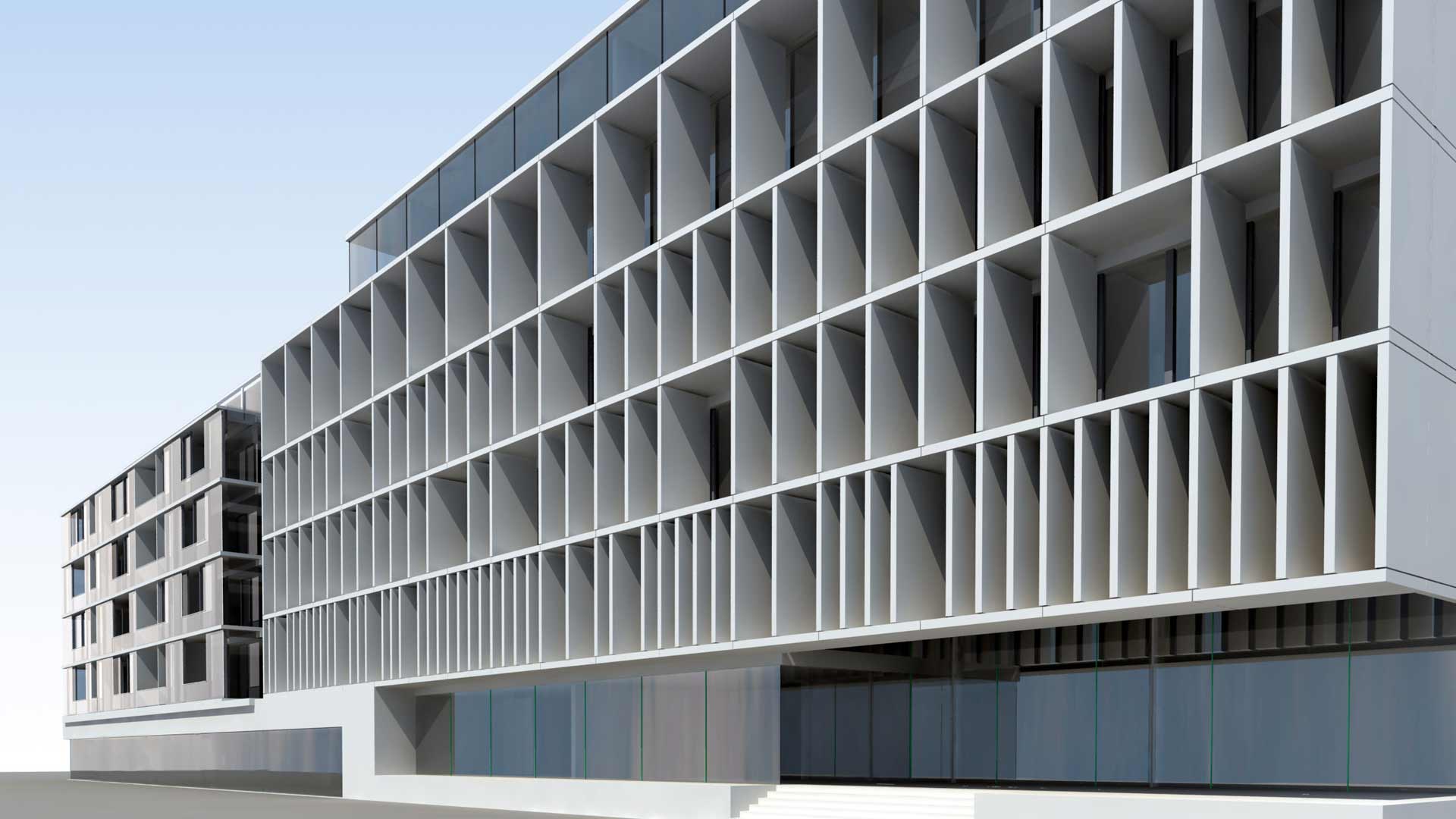 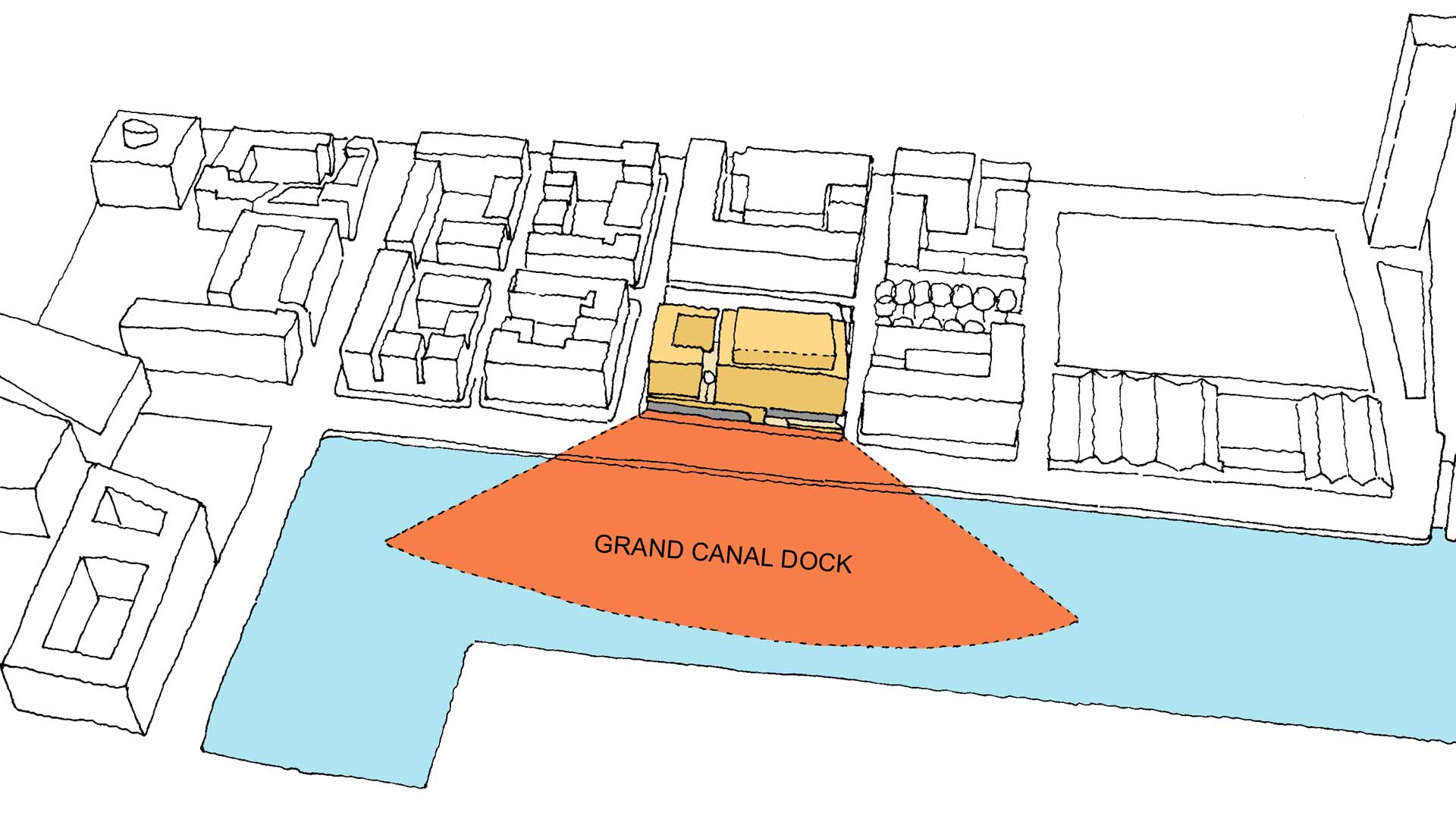 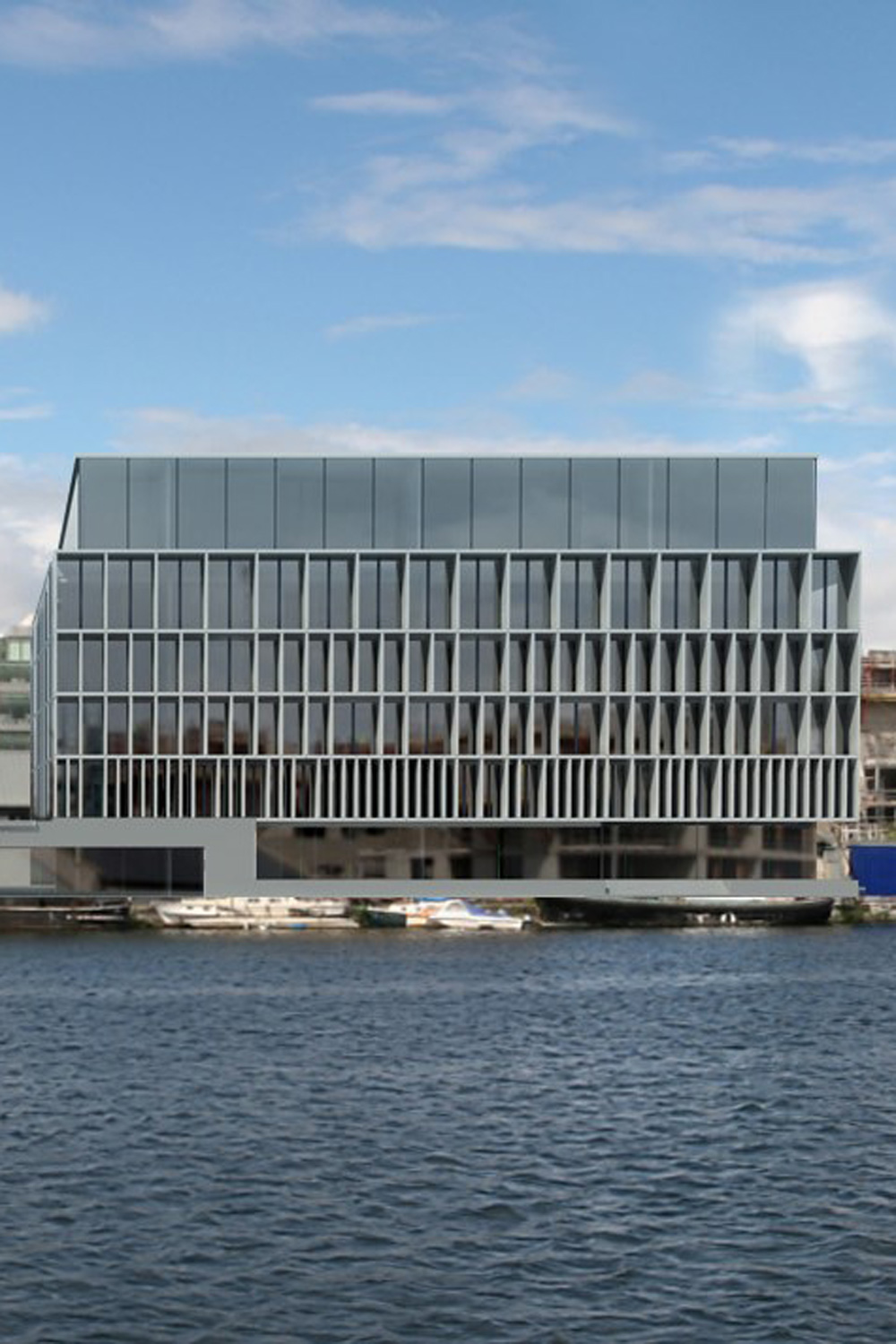 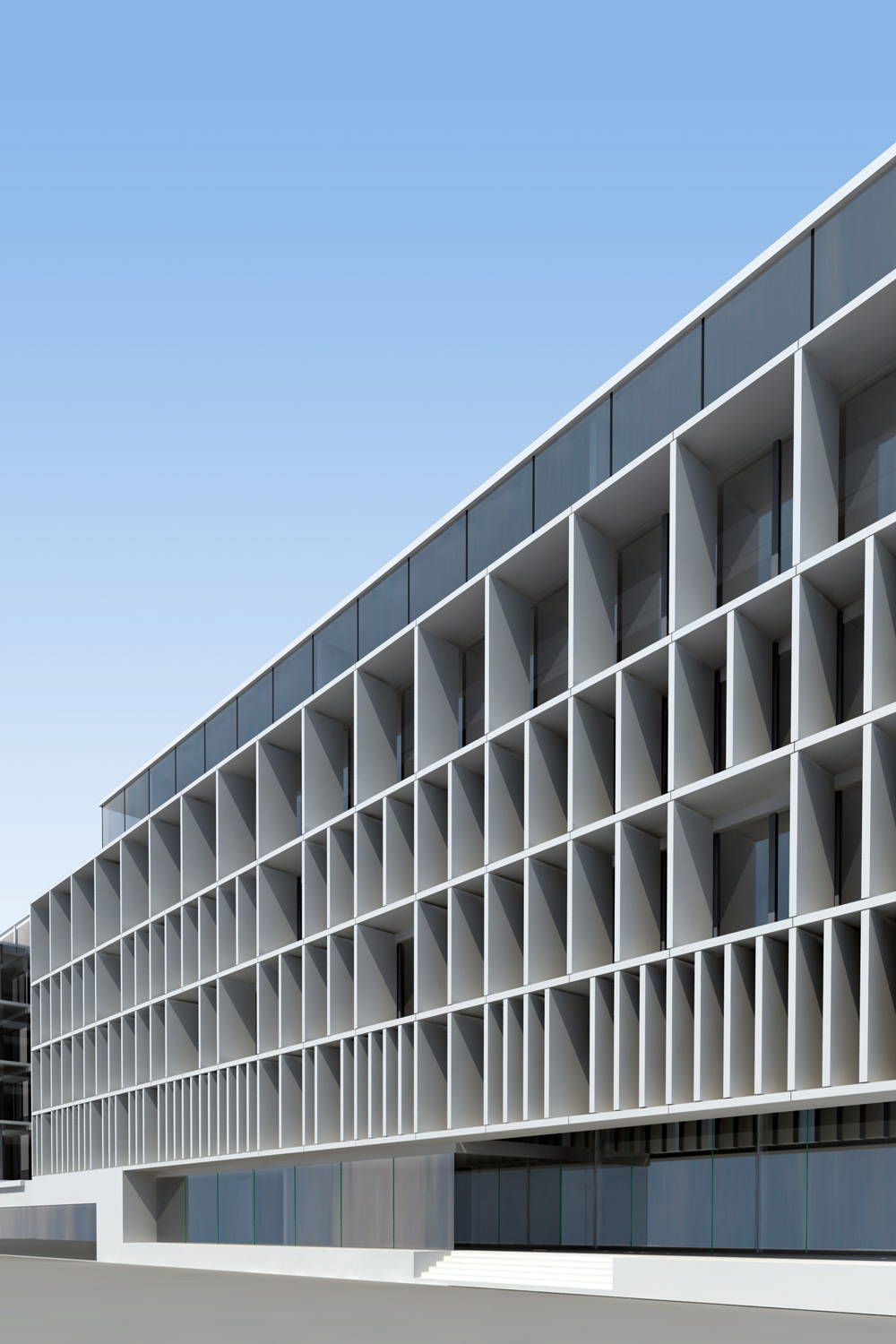 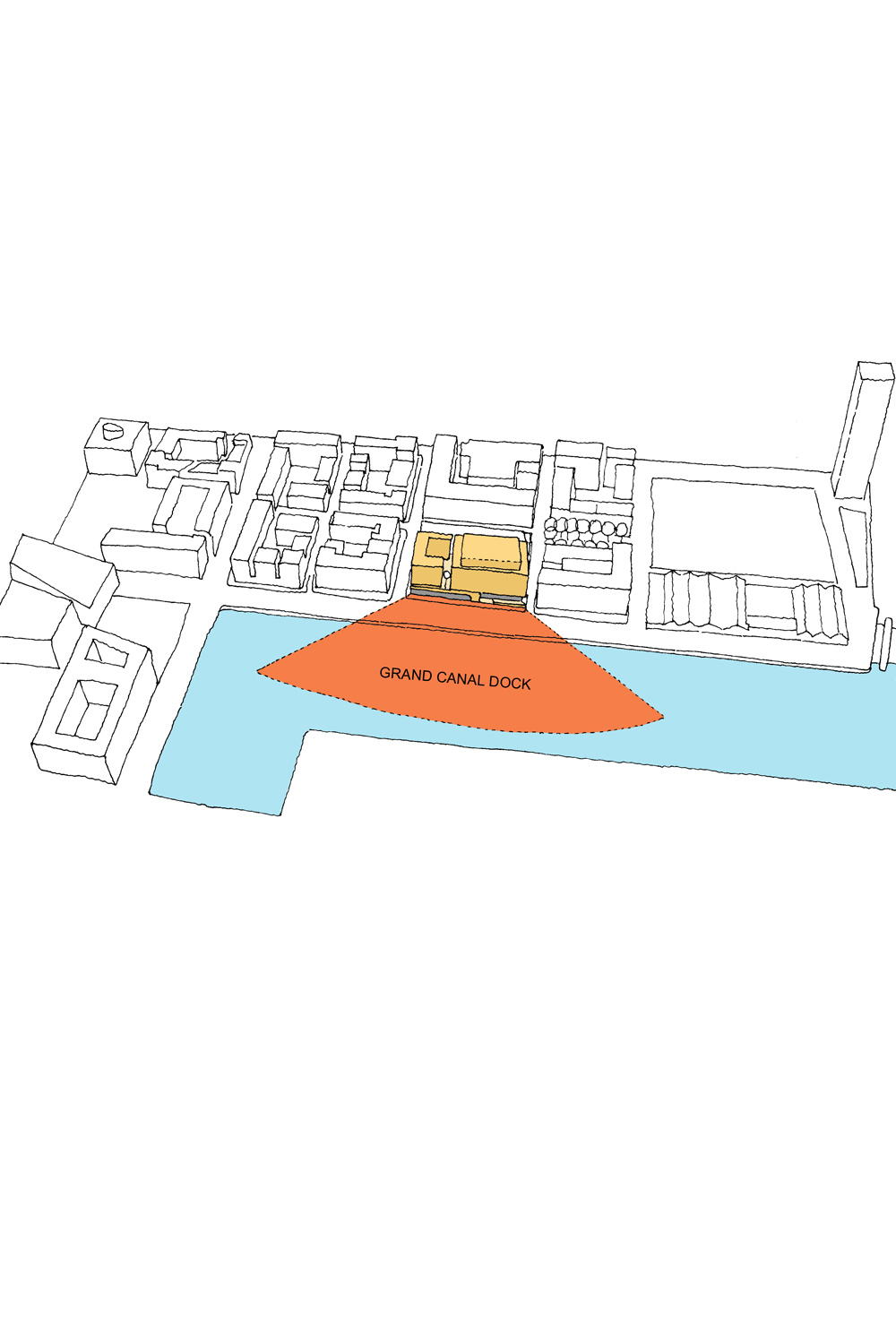 Located centrally on Hanover Quay, the proposed site holds a key strategic site addressing the expanse of water that is Grand Canal Dock while enjoying views to the Dublinmountains beyond. Along with the proposed Grand Canal Theatre at the west end of the dock, the proposed building acts as a landmark along this expanse of water, its broad, 50 meter façade presenting a generous frontage to the water and Charlotte Quay beyond.

Set back from the adjacent buildings along the quay, it marks a widening of the pavement and road as one moves from east to west. The proposed building takes the form of a great Stone and Glass ‘Pallazzo’ which asserts a strong, calm and dignified presence on the Grand Canal Dock.

By day, its deep, regulated façade of monolithic stone and glass creates a dramatic, shadowed façade when viewed across the expanse of the dock while by night, the block, lit externally, acts as a lantern on Hanover Quay. Constructed of 1 meter deep monolithic pre-cast or ‘stone’ fins which vary in spacing from a dense pattern at first floor to a broad, open pattern at fourth floor and create a richly modulated façade when viewed in perspective along the quay and when viewed across the water. The quality and scale of stone is in keeping with a tradition of stone quay walls and civic buildings within the docklands area, while maintaining a light, transparent, modern and open façade.

The building is raised above the pavement by 1 meter and entered beneath the overhanging stone façade via a broad flight of stairs, allowing visitors to pause to view the water when entering and leaving the building. A central atrium brings light into the centre of the organisation acting as a meeting space for the offices. A lower level provides space for social activities such as canteen/restaurant and gymnasium. Fritted, moving glazed screens separate the surrounding offices from the atrium and create a light, diaphanous interior space to the atrium.