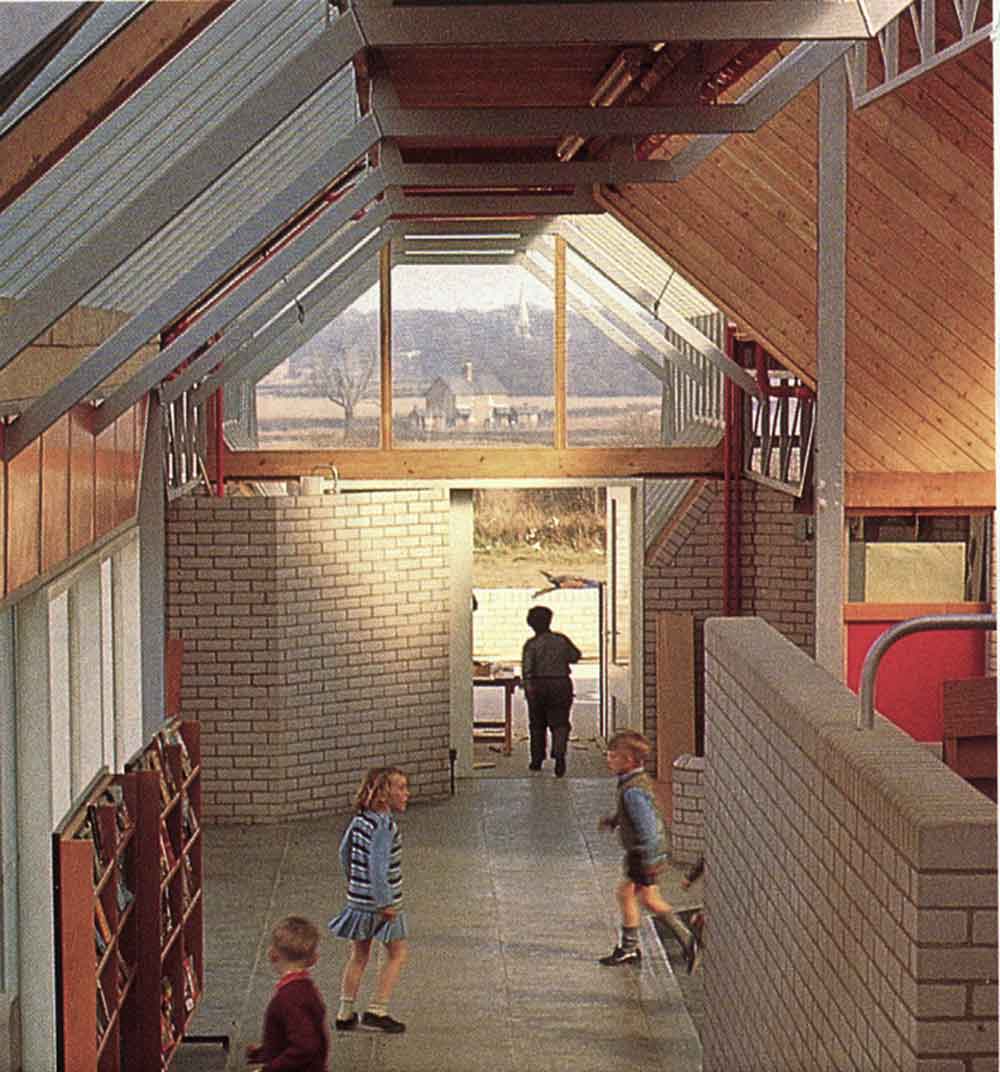 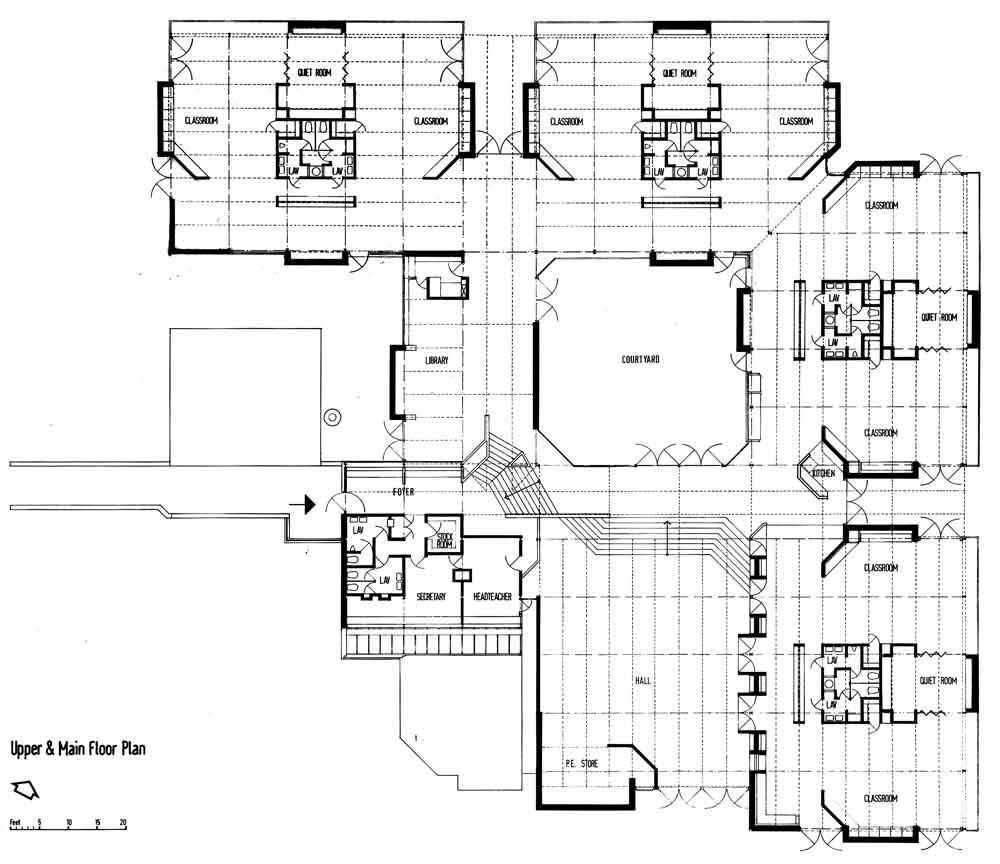 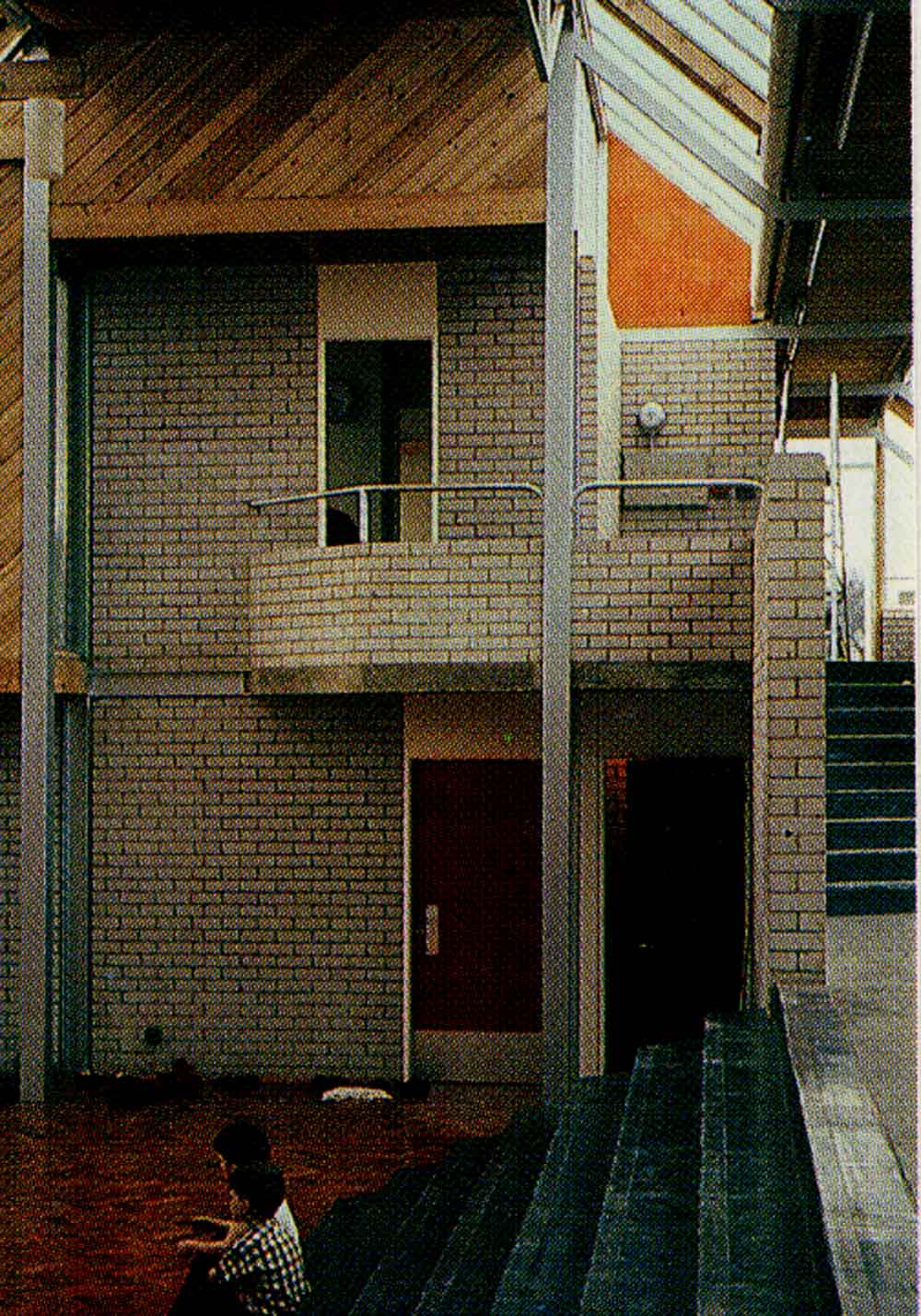 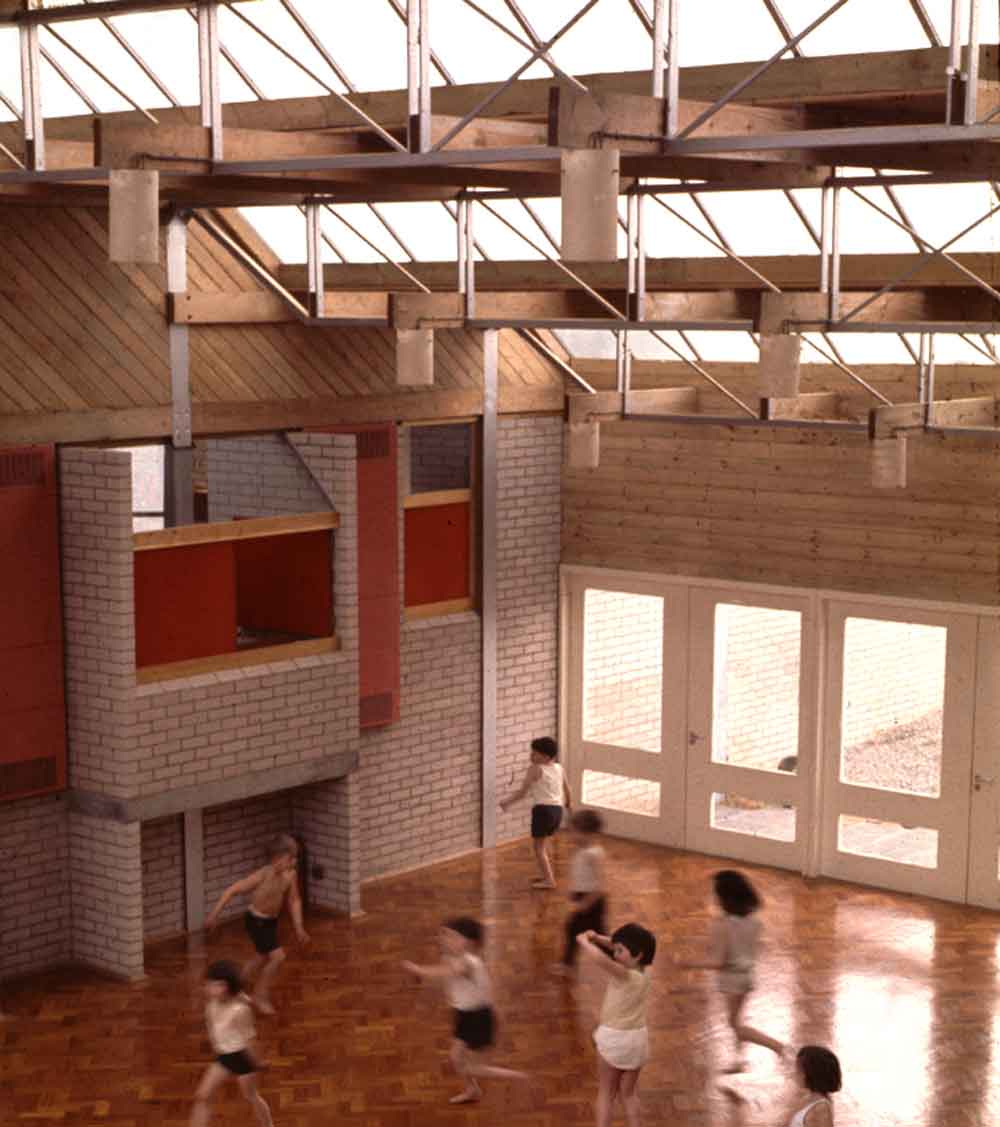 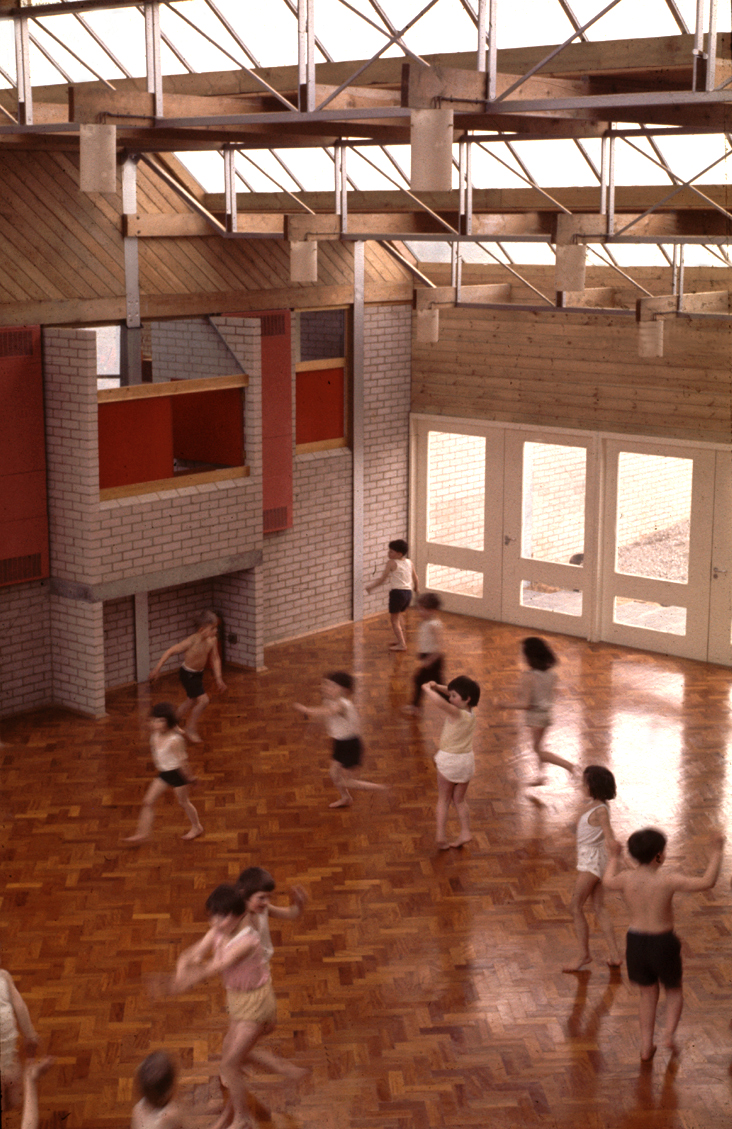 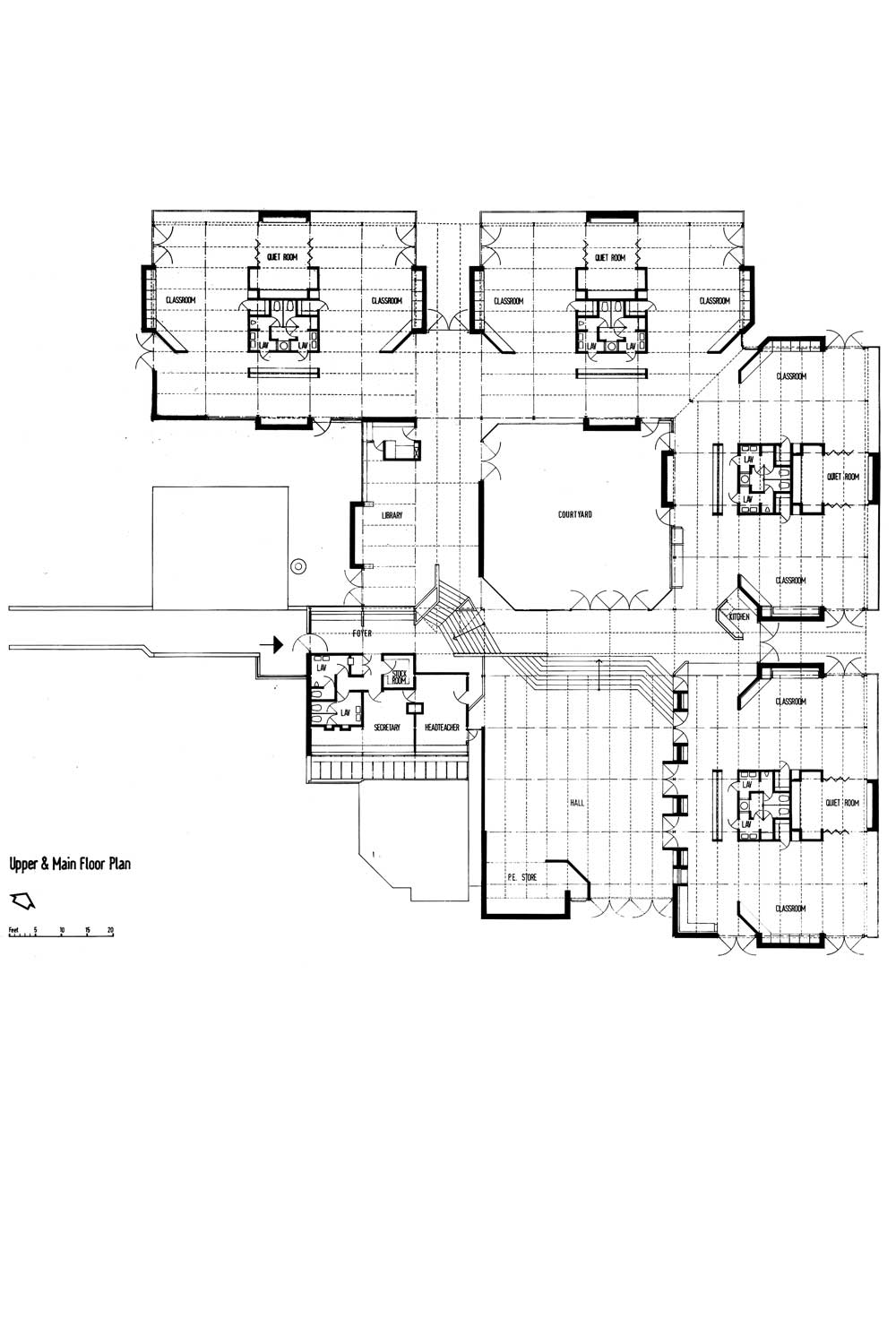 Leicestershire County Council’s approach to education was forward looking and experimental. Our brief was a progression from earlier school, the ideas were extended and developed. We designed a two-form entry, 360 place Junior School, to be built in two stages. Phase 1 consisted of four classrooms, multi-purpose hall, kitchen and administrative accommodation. A further two classrooms and the library area were subsequently added.

The building is seen as a positive contribution to the development of specific educational aims and methods, a move away from the concept of the class as a self-contained unit, an encouragement of activities in varying sized units and a mixing of age groups. We were explicitly required to find a form which would encourage the use of the entire school by all children. Children are given a choice of activities. They are encouraged to use the library freely, which is regarded as a central element in the plan. An open plan was required, yet the importance of private corners was stressed.

The school is conceived as a compact complex of linked spaces, largely open plan and of varying scale ranging from small ‘quiet rooms’ to the main hall and designed to give the maximum variety and flexibility in use.

The teaching accommodation is in a large top-lit single storey area. The main entrance, using the slope of the site, is into the upper level of a 2-storey block, adjacent to the administrative accommodation, and leading to a focal point at which one descends half a level to the main floor. Two routes radiate from here at right angles, through the ‘communal’ spaces: hall, library and central court to the classroom areas. The classrooms are entirely open to a wide circulation route, which both links them together and forms an extension to the classroom area itself – the ‘practical’ area. Pairs of classrooms are further linked by a small ‘resource’ area which can be used as a small quiet room or can be opened to either one or both classrooms. There is a progression through large communal to small ‘private’ and ‘child scale’ spaces, getting away from the traditional concept of ‘rooms’ almost entirely.